Following the success in expanding international cooperation, the Mayor of Houston, The USA officially recognized 2019, June 18 as Ocean Edu Day - Honouring Ocean Edu's contribution to the English language education in Vietnam and affirms the unit's significant influence over the world.

On the morning of June 18 (local time) in Houston City, Texas, Ocean Edu Vietnam delegation led by Mr. Nguyen Van Thuong - Vice Chairman of the Board of Directors (BOD) and Ms. Vu Thi Thanh Loan - General Director. The delegation has had an official visit and work at the Houston Mayor's Office. Here, The BOD of Ocean Edu was awarded the OCEAN EDU HONOURARY CERTIFICATE by Mr. Alan Bernstein - Chief of Office on behalf of Mayor of Houston - Mr. Sylvester Turner for its contribution to education in Vietnam over the past 12 years, as well as officially recognized 2019, June 18 as OCEAN EDU DAY - an unprecedented honour for an English training Center in Vietnam. 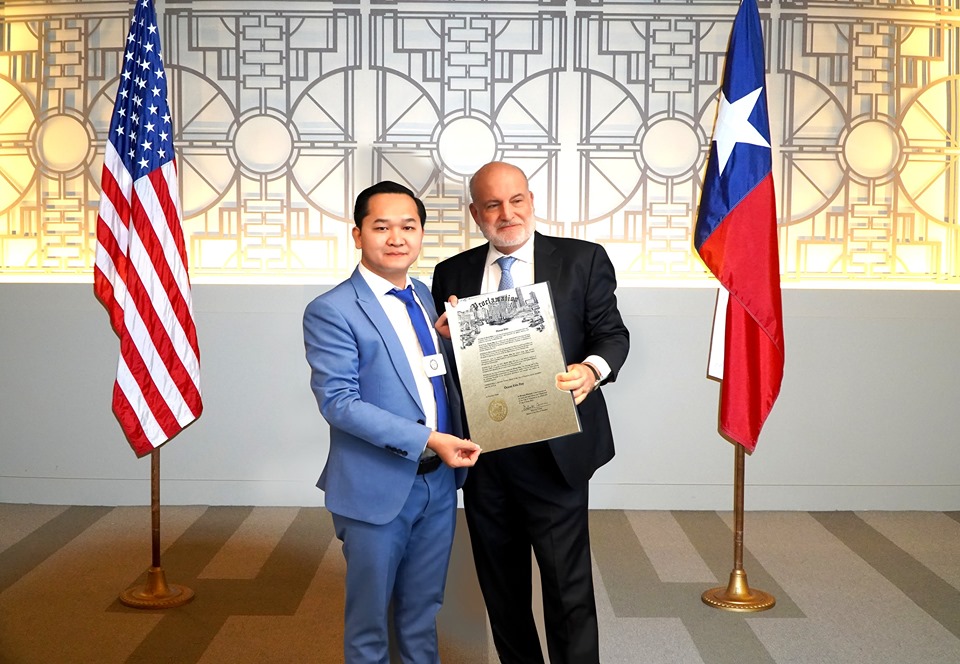 At the meeting with the leader of Houston, Mr. Nguyen Van Thuong - Vice Chairman of Ocean Edu, emphasized: “This is the first step for the cooperation of the two countries to promote the education in particular and the economy of the two countries in general. This visit is also a new and essential milestone for the long-term development of Ocean Edu”.

On the same day, Ocean Edu BOD also had a meeting with the University of Houston-Clear Lake (UHCL) to discuss bilateral cooperation and development on both sides. In the meeting with Dr. Irra Blake - President of UHCL and Mr. Steven Berberich - UHCL Deputy Director, Ocean Edu has planned to open the first representative office at the school, as a premise for Ocean Edu students and Vietnamese students to participate in learning and developing themselves in the international arena. Accordingly, it will open up opportunities for Vietnamese students at UHCL including studying abroad, becoming trainees and partners; establishing an education system according to K-12 standards in Vietnam.

Ocean Edu Board of Director take photos with Professor RuDy Soliz of University of Houston and Dr. Gigi Do International Admissions Director of UHCL

From June 19-21, 2019 the Ocean Edu Delegation will also continue to meet and work with City of Houston Mayor Office, nearby schools and the Embassy of Vietnam Office, open cooperation and development opportunities for all Ocean Edu learners with excellent training programs and the future of studying abroad.