Towards the beloved Central region, where the people are suffering heavy losses due to consecutive storms and floods, Ocean Edu with more than 100 branches nationwide has been mobilizing to donate, support people in difficulty.

Ocean Edu launches a donation to support the people of the Central region at more than 100 branches nationwide.

Every year the flood season returns, millions of Vietnamese people’s hearts together to the Central region - where it is directly affected by severe natural disasters. The loss of people and property keeps multiplying, the lack of food has been and is a burden for people here who are struggling to cope. Board of Directors of Ocean Edu Vietnam and more than 1500 staff responded to the campaign Joining hands towards the beloved Central provines.

With the spirit of love, Ocean Edu English System with more than 100 branches has called for all the generosity from all over the country: Ocean Edu staff, teachers to students on the whole system. Accordingly, the Ocean Edu donation boxes present at more than 100 branches nationwide not only carries the message "happiness comes from the smallest things" but also shows each teacher, every student that they all contribute a small part, join hands to help people overcome this difficulty.

A large number of Ocean Edu students volunteered to support at the donation box located at more than 100 Ocean Edu branches.

More specifically, the campaign "Together Towards the beloved Central region" launched by Ocean Edu not only brought practical and immediate meaning to the people in the Central region who were in trouble but also spread moral values for all employees and dear students. In addition to training knowledge and intelligence, Ocean Edu aims to nurture and train the character of the students "doing the smallest things with love" with a warm heart, sharing, and loving. 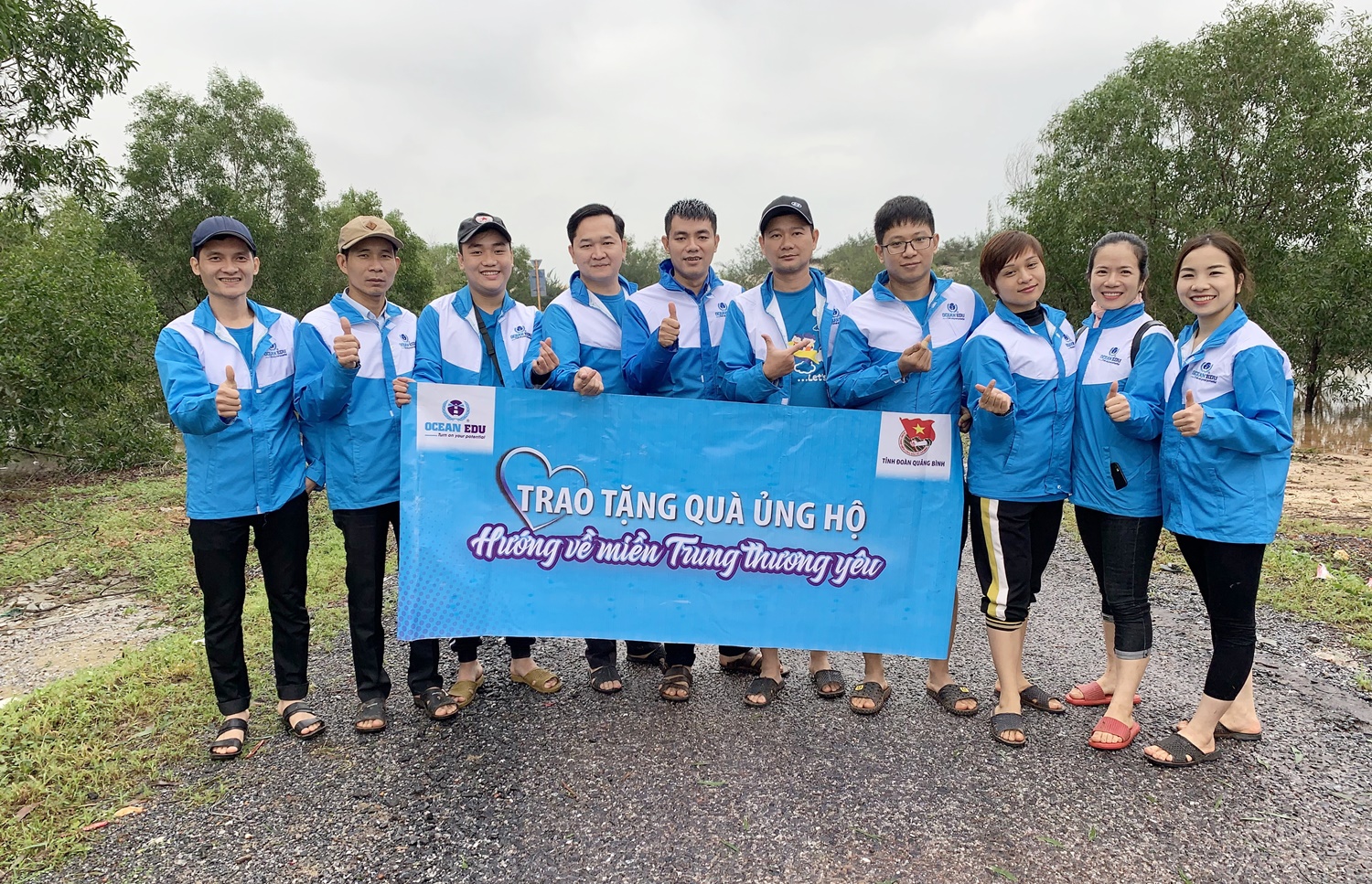 The Ocean Edu Vietnam Charity Group directly participated in the donation of items in the storm and flood area in Central Vietnam.

More specifically, the donated money will be used by Ocean Edu to buy necessities for the people (including dry wages, sausages, milk, instant noodles, rice, cooking oil, fish sauce ...) and cash for difficult households. At the same time, the activity of giving gifts to the people of the Central region was carried out by Ocean Edu in 2 phases: Phase 1: Ocean Edu will come directly and give support items to people (In case it is impossible to go to all households due to unfavourable weather, it can be sent back to the communal union). Expected after Typhoon No. 7 (October 20-21, 2020); Phase 2: After finishing the donation, Ocean Edu will come directly or transfer cash and necessities to local agencies that are affected by the storm and give to families, expected: 30- October 31, 2020. 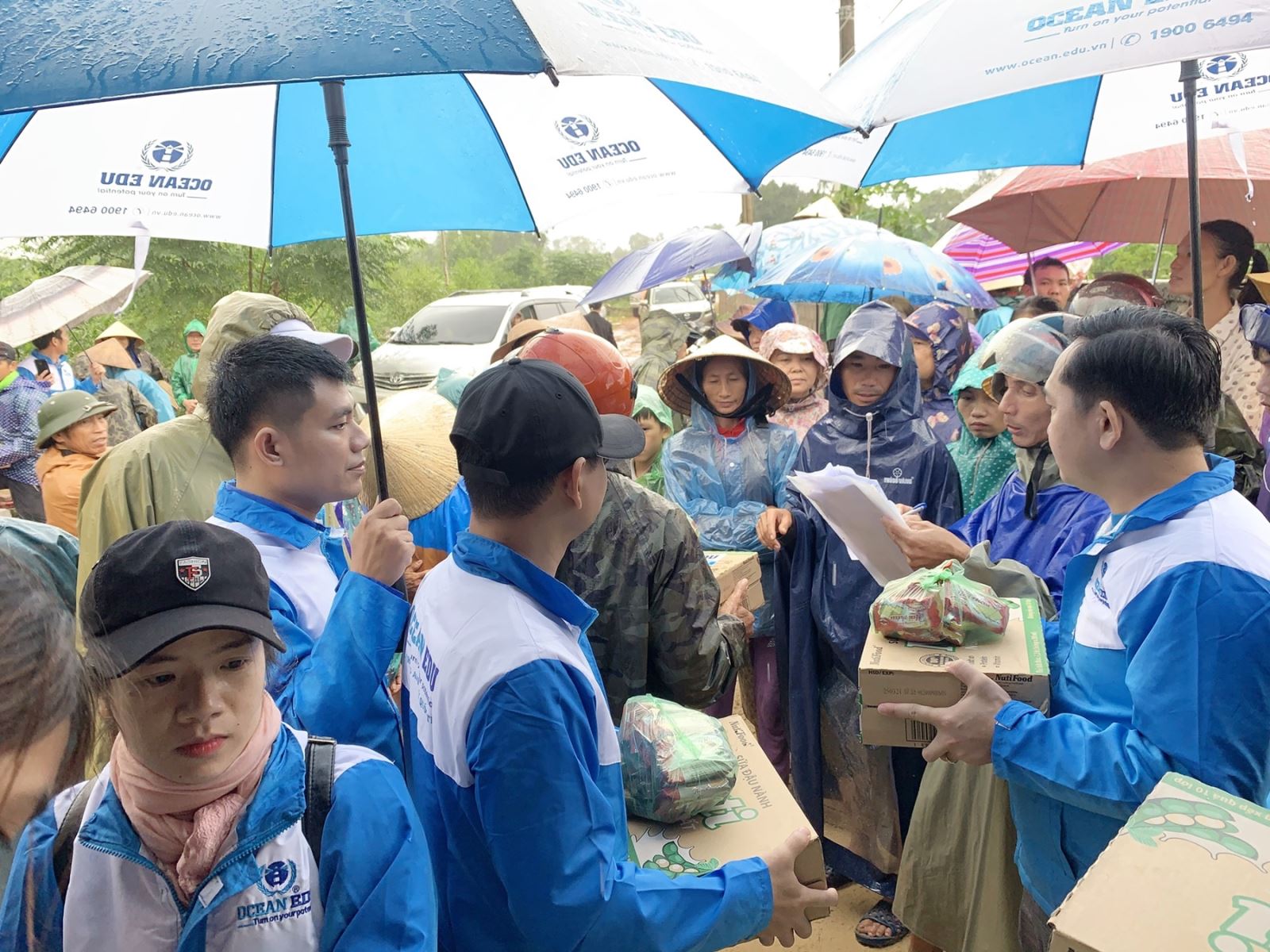 Following that, on October 21, the delegation moved and unloaded 5 tons of relief goods to Hong Thuy commune, Le Thuy district, Quang Binh province. Here, Ocean Edu gave 230 gifts including drinking water, food, and necessities for people. At the same time, Ocean Edu donated 30 bottles of Han-pec EC 50 (dengue prevention solution) to 3 districts of Le Thuy, Tuyen Hoa, Quang Ninh to disinfect because of the dengue fever outbreak. After that, the delegation directly visited and gave gifts to families who are the staff of Ocean Edu Dong Ha branch, Ocean Edu Dong Hoi branch, who were directly affected by storms and floods. 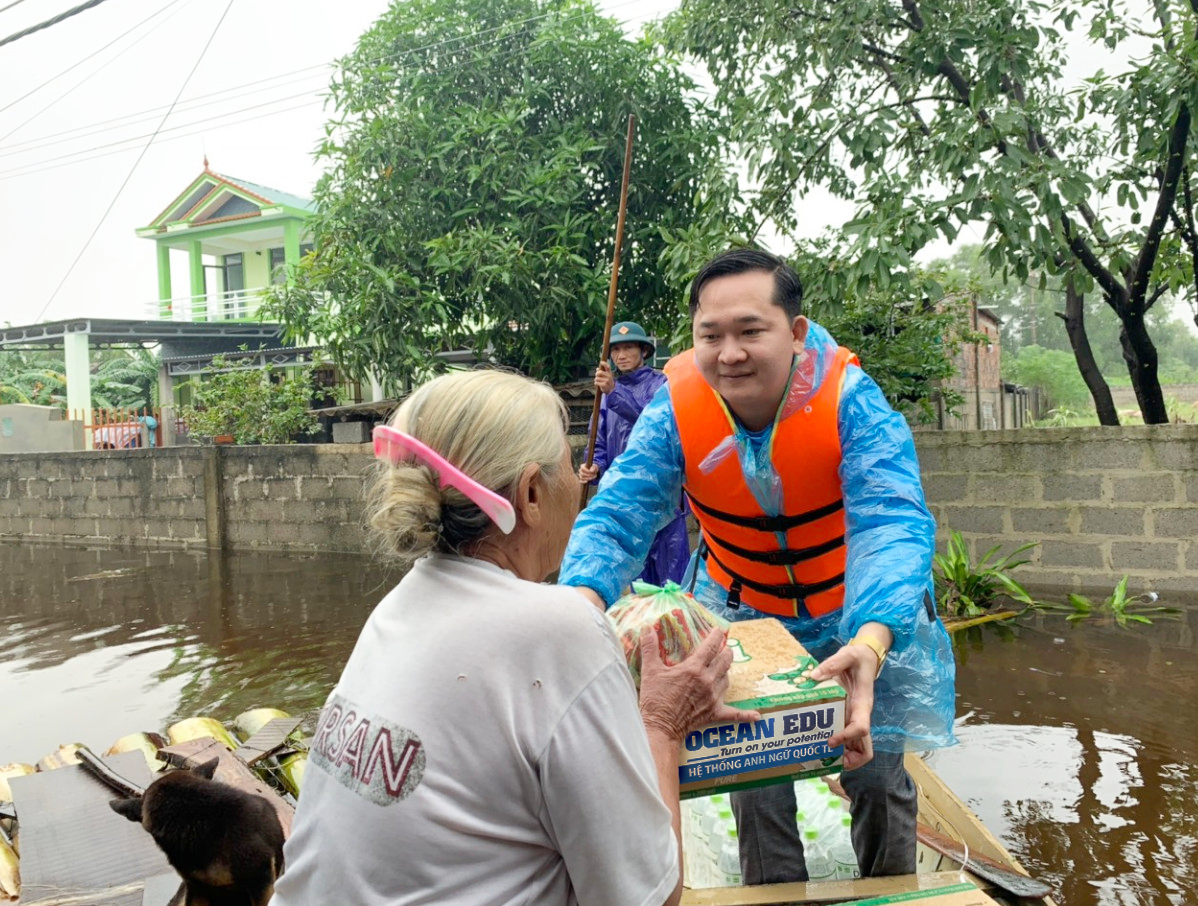 Mr. Nguyen Van Thuong - Vice Chairman of the Board of Directors of Ocean Edu Vietnam directly gave support to people in flood areas.

Ms. Vu Thi Thanh Loan - General Director of Ocean Edu Vietnam shared: “The smallest actions of any individual or group at this time are the most practical contributions to help people in the Central region who are suffering from natural disasters. This is also the spirit of support and solidarity in the tradition that has been preserved and promoted for many generations. Not only is a noble action towards people who are suffering from natural disasters, but this is also an opportunity for the BOD of Ocean Edu to express their concern and sense of responsibility to individuals in the system whose families are suffering natural disasters in Quang Binh and Quang Tri”. 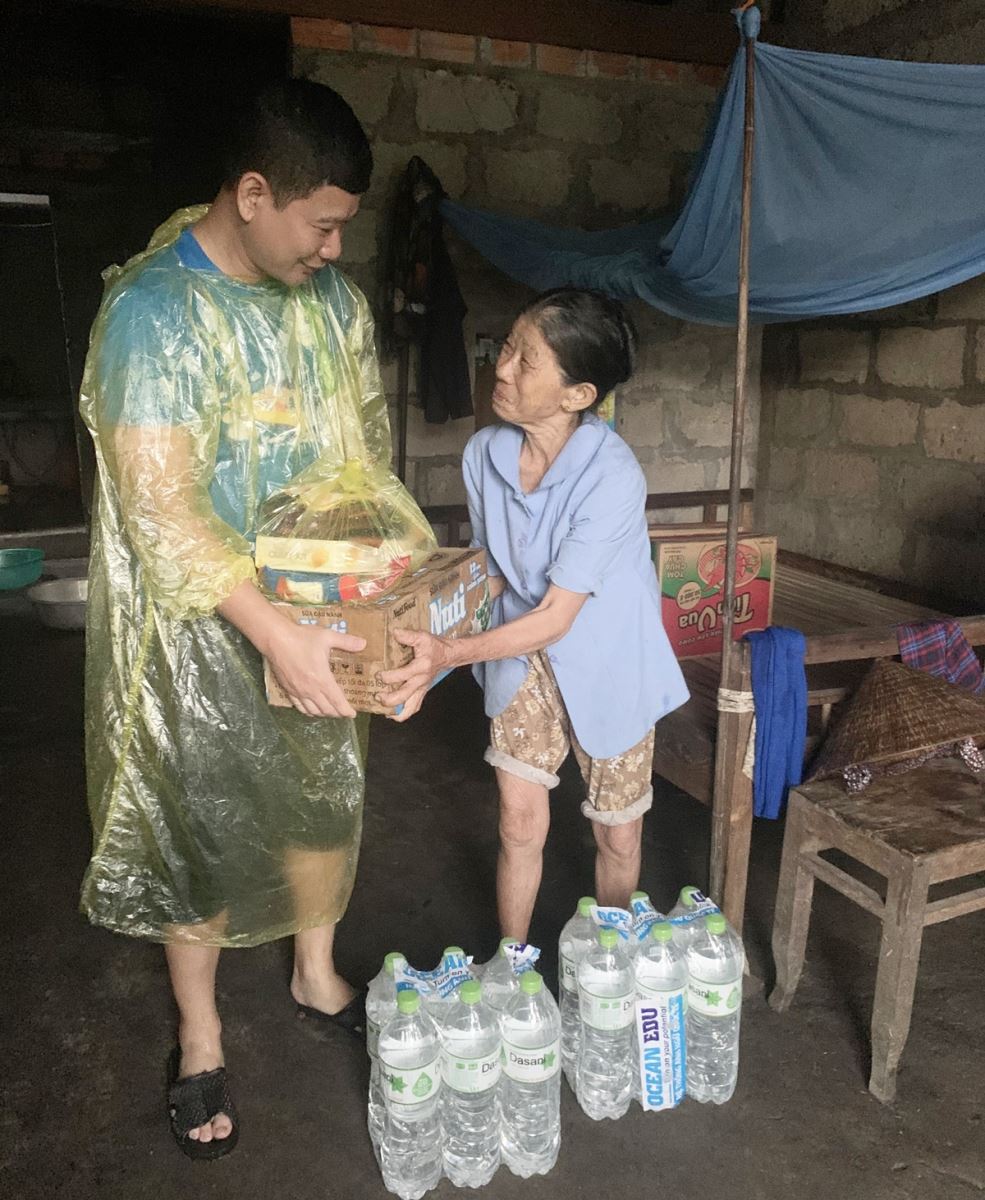 Up to now, Ocean Edu staff and students in the whole system and the sponsor are continuing to have various forms of donating money and necessities to provide the best support for the rescue team as well as support the people in flooded areas in Central Vietnam to overcome difficulties with localities. 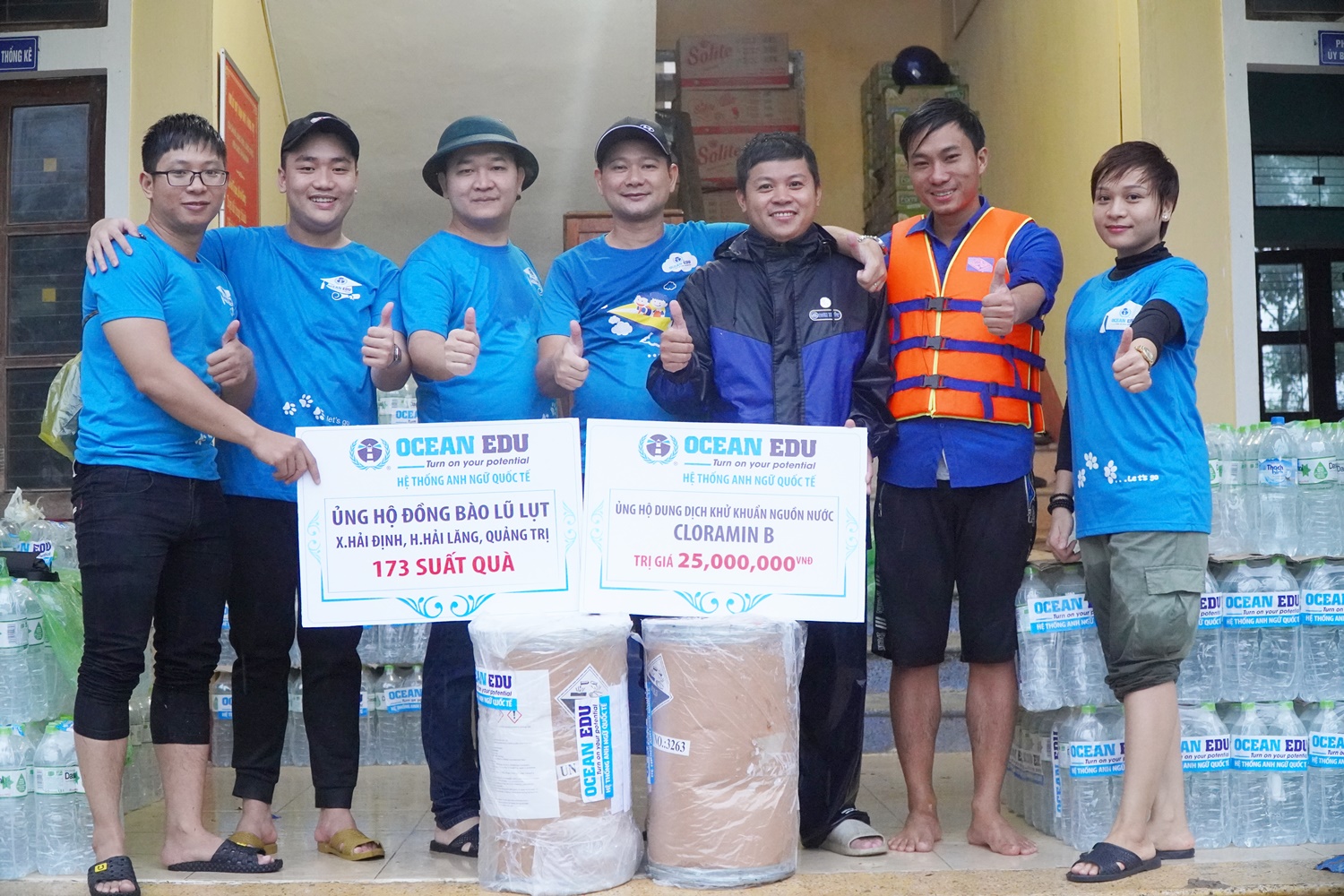 The epidemic of malaria and dengue fever is raging, the floods have not ended and Ocean Edu's loving journey has not stopped there. Accordingly, the campaign "Joining Hands Towards the beloved Central" will continue to accompany and implement the 2nd phase expected on October 30-31 / 2020.